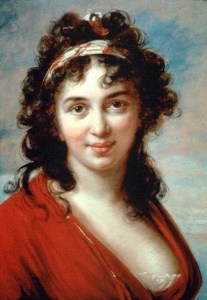 Not very far from St. Marks’ Square, in one of the buildings facing an ordinary courtyard called Calle Michiel, Isabella Teotochi Albrizzi (1760-!836) hosted one of the most famous salotti (salons) of eighteenth century Venice. 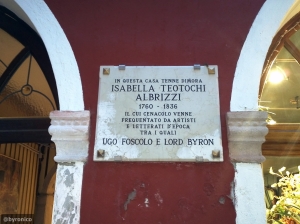 In 1776, when she was only sixteen, the Countess married the noble Venetian Carlo Antonio Marin, but their marriage was very unhappy. It was only after it was annulled in 1795 that she could marry Count Giuseppe Albrizzi the following year. The Count was one of the richest Venetian noblemen of the time and member of an old family that owned a magnificent palace in S. Aponal. He died in 1812, and when she met Byron, Isabella was a widow already in her fifties.

The Countess actually held two salons, one in Venice, and another one just outside Treviso at Villa Albrizzi-Franchetti, along the Terraglio, the ancient road that led from Treviso to Venice: 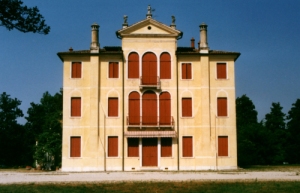 The picture below shows the entrance to Isabella’s house in Calle Michiel in Venice: 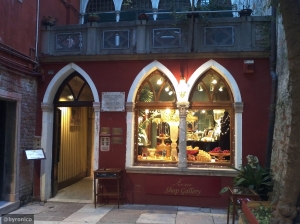 In her Venetian salon, verses and literary characters often composed by the hostess herself were read aloud for the pleasure of the guests. During those meetings, men usually stood and women sat in semi-circle, while drinking glasses of punch. The Countess usually chose the topic, and the conversation was elegant, corteus and low-pitched. 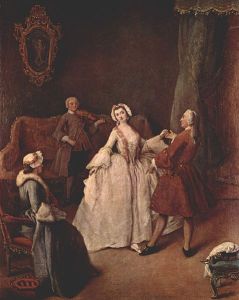 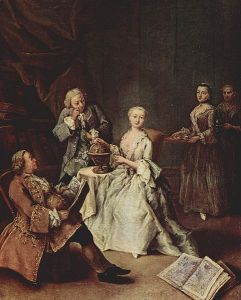 In his Recollections of a Long Life, Hobhouse gives an example of such gatherings:

A few gentlemen and two ladles came into the little room, and water was given when called for. I heard nothing, but saw from smiles and laughter, which now and then was a little equivocal and certainly not high breeding, that the company was good-humoured enough. Mustoxicli came in; lie seemed the enfant gate of the party, who called him Andreas. I cannot help thinking him conceited. lie is said to believe himself the handsomest of men.

I came home thinking Italian society very different from everything I had seen in France or England. The ladies are perhaps over-civil and smiling, and I heard none of that snip-snap, short, and interruption quick, which makes half the talk of Paris and London. A good deal of Greek in this circle. I presume that formerly the possession of the seven islands must have given a tinge to Venice. No politics.

It was from these gatherings that Lord Byron could be acquainted with the habits of the Venetian salons, which he eventually transposed into the satirical poem Beppo, a Venetian Story. 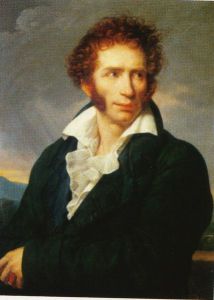 Described by Foscolo as ‘a lover for five days, a friend for a lifetime‘ (the two had a brief love affair), as we have seen she was also mentioned by Hobhouse in his diaries, where he writes that she had been introduced to him as the ‘Madame de Staël of Italy‘, but ‘a very poor copy indeed, though she seems a very good-natured woman‘. Actually, in a letter to Mr. Moore, sent from Venice on December 24th, 1816, Byron remembered her as a very learned woman:

‘The day after to-morrow (to-morrow being Christmas-day) the Carnival begins. I dine with the Countess Albrizzi and a party, and go to the opera. On that day the Phenix (not the Insurance Office, but) the theatre of that name opens: I have got me a box there for the season, for two reasons, one of which is, that the music is remarkably good. The Contessa Albrizzi, of whom I have made mention, is the De Staël of Venice—not young, but a very learned, unaffected, good-natured woman, very polite to strangers, and, I believe, not at all dissolute, as most of the women are. She has written very well on the works of Canova, and also a volume of Characters, besides other printed matter. She is of Corfu, but married a dead Venetian—that is, dead since he married.’ 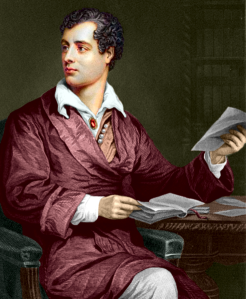 The ‘Phenix’ mentioned by Byron was La Fenice, the glorious opera house of Venice, and the opera box was given to him and Hobhouse by the Countess herself. On December, 27th, Byron wrote enthusiastically to Murray about La Fenice, which he thought was more beautiful than most English and Italian theatres, even though he was not satisfied with the opera he had seen:

‘Yesterday being the feast of St. Stephen, every mouth was put in motion. There was nothing but fiddling and playing on the virginals, and all kinds of conceits and divertisements, on every canal of this aquatic city. I dined with the Countess Albrizzi and a Paduan and Venetian party, and afterwards went to the opera, at the Fenice theatre (which opens for the Carnival on that day),—the finest, by the way, I have ever seen: it beats our theatres hollow in beauty and scenery, and those of Milan and Brescia bow before it. The opera and its sirens were much like other operas and women, but the subject of the said opera was something edifying;’ 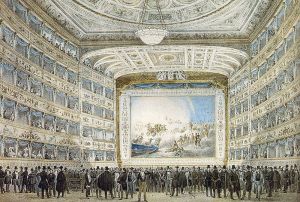 Byron is mentioned to attend Countess Albrizzi conversazioni until early May 1817, when she left for Paris. Upon her return, Byron had already left her salon for that of Countess Marina Querini Benzoni, Isabella’s rival. In spite of the fact that their relationship deteriorated, Byron published a compliment to Countess Isabella in his dedicatory letter to Hobhouse in the Canto IV of Childe Harold’s Pilgrimage, mentioning her, together with eleven other men, as one of the great names of Italy still living. Another mention was in the notes to Marino Faliero, where she is among a dozen ‘honourable individual exceptions‘.

Among those whom Byron included in the dedicatory letter to Hobhouse, a special mention was for Antonio Canova:

‘Italy has great names still — Canova, Monti, Ugo Foscolo, Pindemonti [sic], Visconti, Morelli, Cicognara, Albrizzi, Mezzophanti, Mai, Mustoxidi, Aglietti, and Vacca, will secure to the present generation an honourable place in most of the departments of Art, Science, and Belles Lettres; and in some the very highest –Europe — the World — has but one Canova.’ 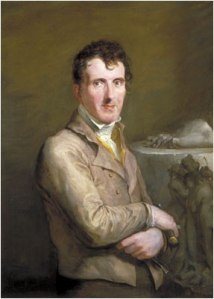 Canova was also one of the many artists and intellectuals that participated in the conversations of the most famous Venetian salons. One of the curiosities in Isabella Teotochi Albrizzi house was the bust of Helen by Canova, which the artist gave to the Countess in 1811 and that was commonly believed to represent the Countess herself. Lord Byron remained so impressed by Canova’s work of art, that he showed all his admiration for the Venetian sculptor in a letter to Murray on November 25th, 1816:

‘The Helen of Canova (a bust which is in the house of Madame the Countess d’Albrizzi, whom I know) is without exception, to my mind, the most perfectly beautiful of human conceptions, and far beyond my ideas of human execution.

On the Bust of Helen by Canova

In this beloved marble view
Above the works and thoughts of Man,
What Nature could but would not do,
And Beauty and Canova can!
Beyond Imagination’s power,
Beyond the Bard’s defeated art,
With Immortality her dower,
Behold the Helen of the heart.’ 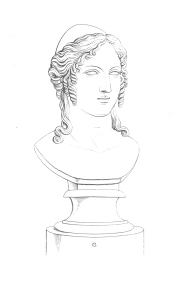 Helen’s bust must also be remembered because it played an important part in Byron’s first encounter with Teresa Guiccioli. In her autobiography, in fact, Teresa remembers how, during her first visit to Countess Isabella’s salon, Byron gave her his arm when she expressed the wish to see the bust. They would meet again at the salon of Countess Marina Querini Benzon, the other famous Venetian salotto, as Byron soon got tired of Isabella’s conversazioni, finding them too polite for his taste, and also didn’t like the way Isabella depicted him in her Ritratti, a literary work devoted to portraying famous men she had met during her life, as we can read from his letter to Giuseppino Albrizzi of 1st July, 1818:

Some time ago I was apprized partly by the Conte Rizzo – & subsequently by your Mother the Countess Albrizzi herself – that the Countess had done me the honour to compose, or write, a character of me – similar to those already written & published of many others with far better claims than mine to her good opinion, & such celebrity as may result from it. – This Character I have never seen – and as – I believe – I expressed both to Madame your Mother & to Conte Rizzo – I never will. – I have not the least idea of it’s contents – not have any reason to suppose them unfavourable – but I have no claims to be classed with the Italian & other worthies of the previous Collection – and to say the truth – am not particularly ambitious of appearing so publicly now, or at any future period, in their company. – You will therefore oblige me greatly by respectfully requesting the Countess your Mother to deliver to the flames this Character – (if still in existence) the publication or even circulation of which would be painful to me – at the same time assuring her that I am honoured by the kindness of her intention, (at the same time that) although I feel it my duty to decline it – & to beg that the sketch may be destroyed.

Isabella did not publish her portrait of Byron until 1826, in an edition of her Ritratti that included an extended version of the original that Byron wanted her to destroy.