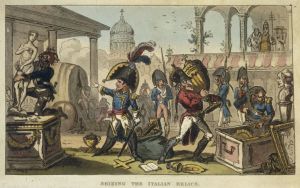 In 1797, on the anniversary of the 9th Thermidor 1794, the day that put an end to the French Revolution with Robespierre’s execution, the French Directory organized a triumphant celebration in Paris, a parade of all the trophies that Napoleon had looted during the European campaigns. The parade went on for two days, from the 27th to the 28th July 1797, from the Austerlitz district to the Champ de Mars, the gathering place traditionally used for the Revolution celebrations.

Starting with big floats carrying the two huge statues of the Nile and the Tiber coming from the Vatican, the parade also exhibited the four bronze horses stolen from Venice. Among the other trophies there were the Transfiguration by Raffaello, the Madonna della Vittoria by Mantegna, the Crucifixion of St. Peter by Guido Reni, The Wedding at Cana by Veronese as well as ancient Grecian and Roman statues stolen from Naples and Pompeii. From the Vatican came the Laocoön, the Apollo Belvedere, and the Venus de’ Medici. As we can imagine, an awesome treasury from a country brought to her knees. 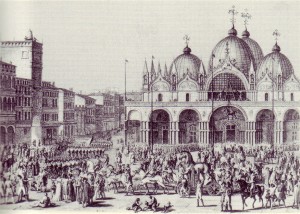 During the Italian campaign, the works of art were gathered in Leghorn, then shipped to Marseille and by river navigation to Paris. The French Directory was persuaded that the French Republic, born from the Revolution, was the only nation that could host the world’s masterpieces and preserve them for the future, because of the superiority of the Enlightenment. This theft and sack was curiously called “extraction”. 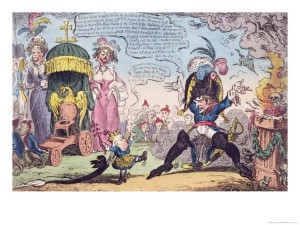 The plunder and looting of art and other treasures was a custom of the time, because armies were very expensive and the troops badly paid, sometimes raggedy dressed, living in practice on the shoulders of the countries they conquered. Wars were self-financed and the French citizens hadn’t paid any tax since 1789, the year of Revolution. For all these reasons, Napoleon used the peace treaties to add clauses that would legitimate looting: works of art weren’t merely trophies but war tributes. He even established a technical commission composed by specialists led by Dominique Vivant Denon, the future director of the Louvre, who believed that the foreign masterpieces had better stay there than in any other place, like in the case of the “Apollo Belvedere”, because “here you [could] admire it from any angle”. 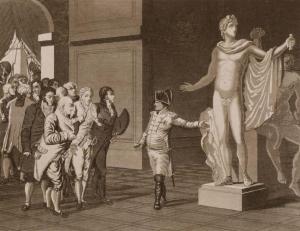 Anonymous, “Napoleon next to the Apollo Belvedere” (looted in Italy in 1797)

When Napoleon lost at Waterloo, on 18th June 1815, Prussians, English and winning allies began to clear out the museum, now “Musée Napoléon”, and bring home the works of art. Among the Italians, Antonio Canova was appointed by the Vatican to bring back to Rome all the masterpieces plundered by the Corsican. On 5th October 1815 the sculptor wrote that his “mission had come to a successful conclusion”, even though he added that he was “bound to leave many works of art there, based upon [his] own choice”. At the time, the Louvre still hosted, among the others, such works of art as the “Apollo Belvedere”, the “Venus de’ Medici”, the Borghese collection, 7 Vincis, 9 Correggios, 15 Veroneses, 10 Tintorettos, 25 Raffaello, 24 Titians. Out of 506 paintings, only 258 were returned to Italy, and the remaining, mainly belonging to the State of the Church, still remain in France. On 24th October, 1815, 41 carts escorted by German soldiers arrived at Milan, from where the works of art where shipped to their final destinations. 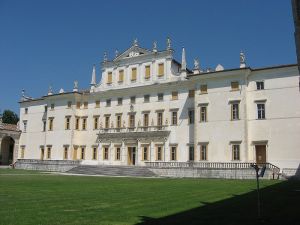 The circumstance regarding Canova happened in the beautiful Villa Manin at Passariano di Codroipo, in the province of Udine, right after the fall of Venice. This villa, which hosted Napoleon’s headquarters, became in fact the seat of the five-month negotiations that led to the Treaty of Campoformio (17th October, 1797), which signed the end of the Republic of Venice and her territories. The treaty validated the birth of the Cisalpine Republic, that adopted the French Constitution, handing over the Venetian territories to Austria. We can well imagine how the people of those territories felt, when Napoleon made over something that didn’t belong to him. 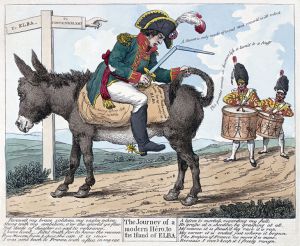 “The Journey of a Modern Hero to the Island of Elba”

It was there, during a banquet at Villa Manin, that the anecdote about Canova is said to have happened. We can imagine Napoleon’s officers in dress uniform, dancing with beautifully dressed ladies to the sound of the orchestra, dames with their cavalier serventi, local noblemen biting the bullet and ready to accept the new constitution in order to survive, servants offering wine and, among them, a 40-year old Antonio Canova.

Napoleon, who was only 28 at the time, had cleared the Austrian army out of their strongholds, showing a remarkable ability to strike the enemies, as well as a gift for propaganda. He had also recently started to sign himself “Bonaparte”, more French, as opposed to “Buonaparte”, a surname that would disclose his Italian-Corsican origin.

It is in this context that we should imagine a conversation of the General about Italy, her people, their habits and characters. Among those listening to Napoleon, there were the geographer Berthier, Joachim Murat, the aide-de-camp Marmont and the valorous generals of the Armeé d’Italie: Masséna, Augereau and Laharpe. 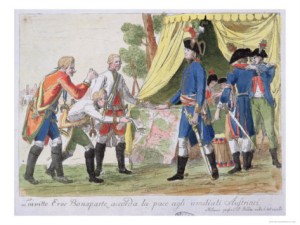 The Signign of the Treaty of Campo Formio

Antonio Canova is part of the company. Napoleon speaks about the Italians in a very rude way: “Italians are all thieves”. We don’t know the context and we don’t know if this is really what he said, but it seemed that he wanted to insult the Italian hosts. It was at this point that, as the accounts of the time state, Canova exited from the shadow and replied: “Not all of them, but buona parte“, which literally means “many of them”, rendered in Italian with Napoleon’s real surname, changing completely the meaning, as “many of them” (“buona parte“) also means “Buonaparte”. An imaginary sword cleaved the Corsican honour, the equivalent of winning a battle, some years before Nelson and the Duke of Wellington.

A variant of this anecdote, probably coming from the Papal States, was a bon mot not directly referred to Canova. It probably represented in fact the feelings of the population that endured the French looting of the State of the Church. The variant in this case was: 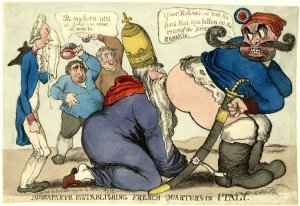 It is not clear if the second anecdote inspired the legend of Canova’s answer, or if Canova’s answer is a real episode that was later absorbed in popular culture. However, a question that I’ve always asked myself is: was that the only moment when Canova made a fool of Napoleon? How would you depict a short dictator who pretends not to be of Italian-Corsican origin, calls himself “Emperor”, crowns himself in front of the Pope, wants to conquer the world in the name of liberty and systematically loots the countries he conquers saying that he wants to free them?

What’s better than a statue that represents an hyperbole, an exaggeration of all the flaws of Le Petit Tondu (“the Short Bold Man”), as his veterans called him? The idealised statue at Apsley House, based on the iconography of Augustus, also represented what Napoleon was not: an invincible hero. For what reasons do you think the Corsican refused to accept the statue, considering it “too athletic” and banning the public from seeing it? Did he feel embarrassed at seeing himself from the outside, and finding out that the image he had of himself, the image he wanted the others to see, was in reality false?

Did Canova do this on purpose? Was he making a fool of Napoleon? 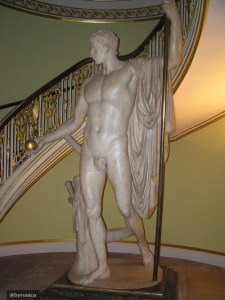 8 thoughts on “The Sack of Italy, or How Canova Made a Fool of Napoleon”