There are many churches that we can still admire in Venice, but we can no longer see San Geminiano, a church of great artistic and architectural heritage that has had many vicissitudes, having been destroyed and rebuilt several times in the course of history.

In the area occupied by the last church of San Geminiano there was previously another church dedicated to the same saint, built in the sixth century (between 554 and 564), together with the church of San Teodoro, that were both given to Venice as a gift by the Byzantine general Narses for the help given by the Venetians at the siege of Ravenna. According to historians, it is not clear if the first church of San Geminiano was destroyed by a fire in 976 or in a series of fires, earthquakes and seaquakes that occurred in Venice in 1106 and that also caused damages to the Basilica and the adjacent Palazzo Ducale. The church was however immediately rebuilt, and subsequently demolished and built again by Cristoforo del Legname in 1505 and later restored by Jacopo Sansovino in 1557, who gave it its final look. 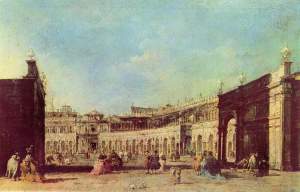 Francesco Guardi (1712-1793), Piazza San Marco in Venice, opposite the Basilica. On the background, the façade of Sansovino’s church, San Geminiano (After 1776)

Although small, it was among the most decorated churches of Venice and displayed a large number of works of art. From the journals and letters of the various travellers and writers who were lucky enough to visit this church, we know that it contained works by Jacopo Tintoretto, Veronese, Gerolamo Santacroce, Giuseppe Scolari, Ludovico Spinelli, Alvise dal Friso, Gerolamo Brusaferro, Sebastiano Ricci, Gregorio Lazzarini and Bartolomeo Vivarini. According to critics, however, despite the presence of works of art of the greatest masters of the time, the importance of the church derived from its architecture. Its beautiful proportions and stylistic choices fitted perfectly with the surroundings, to the point that the same Sansovino chose an adjacent chapel as his burial place.

Unfortunately, the French government that occupied the city was not preservation-minded and decided to demolish the church to make room for the Napoleonic wing, now part of the Museo Correr. Napoleon wanted to build a stateroom and a staircase suitable for the building, which according to his plans, would be used by the Viceroy Eugene Beauharnais and Napoleon himself when they were in Venice.

The demolition began on 19 May 1807 and the project of the new building was given to the royal architect Giovanni Antolini. The works of art inside the church followed different paths: some were dispersed between Italy and other countries, while others were placed in other churches. Now, the body of Saint Geminiano is buried inside the Oratorio del Nome di Gesù, while the ashes of Sansovino are kept inside the Basilica of San Marco. 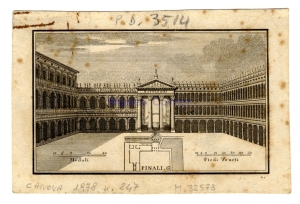 Giovanni Antolini, Project for the imperial lodgings in the place where the church of San Geminiano was, 1807 (Source: engramma)

Gaetano Pinali, Project of the building that had to replace the church of San Geminiano (card) (Source: engramma) 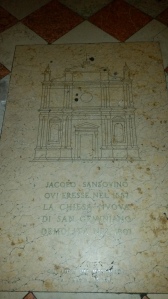 Inscription on the floor of the site which was occupied by the church of San Geminiano. The wording says:

This painting is the famous The Wedding Feast at Cana (1563), by Paolo Veronese. Before being plundered by Napoleon’s troops …

Ian Fleming I bathe every afternoon at the Lido. But not at the fashionable plage. I bathe at the Bagni …

Ugo Foscolo Cenotaph in Chiswick, London Here for the first time in my life I have learnt that my name …

Cell in the Pozzi, next to the Doge’s Palace De chi me fido guardami iddio De chi no me fido …

October 1797, Il faut danseur. The people of Italy depicted in their regional masks, forced to dance around the Tree …

Countess Teresa Guiccioli After his visits to Arquà in 1813 and 1818 (see my previous post here), Lord Byron returned …