I have fallen in love, which, next to falling into the canal (which would be of no use, as I can swim), is the best or the worst thing I could do. I have got some extremely good apartments in the house of a ‘Merchant of Venice’, who is a good deal occupied with business, and has a wife in her twenty-second year. Marianna (that is her name) is in her appearance altogether like an antelope.

At the time when he started to learn Armenian at the San Lazzaro monastery in Venice (which I have already talked about in another article here), Byron had a love affair with Marianna Segati, the twenty-two-year-old wife of his Venetian landlord, a draper whose shop name, Il Corno (“The Horn”), was soon changed by his apprentices to Il Corno Inglese (which in English would be rendered as “The English Cheat”, as the Italian expression mettere le corna, or “to cheat on somebody”, comes from the word corno, or “horn”).

We shouldn’t think of a situation in which everybody knew of the adultery and made fun of the poor draper without him knowing about it. It was quite usual in Venice (and in other parts of Italy too) to have a sort of “official” lover, called cavalier servente, whose purpose was that of accompanying the wife to the theatre or conversazioni, and in many cases his services weren’t confined to those. This peculiar character, so common in Venetian society, also criticized by Joseph Addison and defended by Giuseppe Baretti (Samuel Johnson’s Italian friend), was a kind of “safeguard institution”, for both the husband and the wife, because marriages were often arranged, and separation, not to mention divorce, was out of the question. Some sources also report that the “poor” draper accepted money for Byron to carry on with Marianna. In a subsequent letter to Mr. Moore of 25th March 1817, Byron refers again to this strange relationship, talking of the “perversion” of reasoning of Italian women:

The Italian ethics are the most singular ever met with. The perversion, not only of action, but of reasoning, is singular in the women. It is not that they do not consider the thing itself as wrong, and very wrong, but love (the sentiment of love) is not merely an excuse for it, but makes it an actual virtue, provided it is disinterested, and not a caprice, and is confined to one object. They have awful notions of constancy; for I have seen some ancient figures of eighty pointed out as Amorosi of forty, fifty, and sixty years standing. I can’t say I have ever seen a husband and wife so coupled. 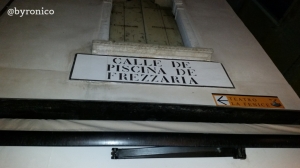 “I do not tire of a woman personally, but because they are generally bores in their disposition”

Marianna, a typical example of Venetian beauty, who 40 years before would have suited Casanova’s harem, was described by Rawdon Brown as “a demon of avarice and libidinousness, who intrigued with every resident in the house, and every guest who visited it”. In the same letter of November 17th 1816, which I quoted at the beginning of this article, Byron described Marianna as a woman with

(…) large, black, oriental eyes, with that peculiar expression in them which is seen rarely among Europeans—even the Italians—and which many of the Turkish women give themselves by tinging the eyelid,—an art not known out of that country, I believe. This expression she has naturally,—and something more than this. In short, I cannot describe the effect of this kind of eye,—at least upon me. Her features are regular, and rather aquiline—mouth small—skin clear and soft, with a kind of hectic colour—forehead remarkably good: her hair is of the dark gloss, curl, and colour of Lady J * *’s: her figure is light and pretty, and she is a famous songstress—scientifically so: her natural voice (in conversation, I mean,) is very sweet;

In spite of this enthusiasm, his affair with Mariannna did not last through the following year. It is, however, interesting to read how the excitement about this relationship contrasts with his opinion on women, whom he considered “bores in their disposition” (letter to Murray of January 2, 1817):

I am very well off with Marianna, who is not at all a person to tire me; firstly, because I do not tire of a woman personally, but because they are generally bores in their disposition; and, secondly, because she is amiable, and has a tact which is not always the portion of the fair creation; and, thirdly, she is very pretty; and, fourthly,—but there is no occasion for farther specification. * * * * * * * * * So far we have gone on very well; as to the future, I never anticipate,—carpe diem—the past at least is one’s own, which is one reason for making sure of the present. So much for my proper liaison.

Byron’s lodgings are still there, but no plaques commemorate his stay

As Gregory Dowling has pointed out in his “In Venice and the Veneto with Lord Byron”, Byron’s lodgings were in Calle della Piscina 1673, just off the Frezzeria, not far from Piazza San Marco. On 14th November 1816, Hobhouse reported in his journal that “Byron took up his quarters at some lodging for which he is to give twenty francs a day and keep them for two months.”. In a note to Hobhouse’s journal, Peter Cochran (also quoted by Gregory Dowling), said that “This was the draper’s shop of Piero or Pietro Segati, husband of B.’s first Venetian mistress, Marianna. They lived in the Frezzeria, two blocks away from the Piazza San Marco. Whether B. moved in because of her is not clear: he would not have lodged with a draper in England. His move may have prompted H. to leave Venice as soon as his brother and sister arrived on 23 Nov.” 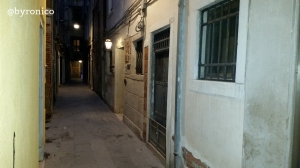 A famous episode, worthy of Congreve and Goldoni, which all Venice gossiped about

This house was the scene of a famous episode in which Marianna caught her sister-in-law in conversation with Byron. As he explained in a letter of 28th January 1817, Byron had received by means of a gondolier a note requesting an assignation, in which the writer asked to meet him either in a gondola, at the Island of San Lazzaro or “at a third rendezvous, indicated in the note”. Byron said that none of those places suited him and that he would either be at home at ten at night alone, or be at the ridotto (a casino where noblemen used to meet for playing cards or having gallant adventures) at midnight, where the writer might meet him masked while Marianna would be off to a conversazione with her husband. Ten o’clock arrived and:

the door of my apartment opened, and in walked a well-looking and (for an Italian) bionda girl of about nineteen, who informed me that she was married to the brother of my amorosa, and wished to have some conversation with me. I made a decent reply, and we had some talk in Italian and Romaic (her mother being a Greek of Corfu), when, lo! in a very few minutes in marches, to my very great astonishment, Marianna S * *, in propriâ personâ, and, after making a most polite curtsy to her sister-in-law and to me, without a single word seizes her said sister-in-law by the hair, and bestows upon her some sixteen slaps, which would have made your ear ache only to hear their echo. I need not describe the screaming which ensued. The luckless visitor took flight. I seized Marianna, who, after several vain efforts to get away in pursuit of the enemy, fairly went into fits in my arms; and, in spite of reasoning, eau de Cologne, vinegar, half a pint of water, and God knows what other waters beside, continued so till past midnight.

As Peter Quennell wrote in “Byron in Italy”, the whole scene was as if “Congreve had composed a farce in collaboration with Goldoni”. Byron then explained how Marianna found out that someone was going to meet him during her absence:

After damning my servants for letting people in without apprizing me, I found that Marianna in the morning had seen her sister-in-law’s gondolier on the stairs; and, suspecting that his apparition boded her no good, had either returned of her own accord, or been followed by her maids or some other spy of her people to the conversazione, from whence she returned to perpetrate this piece of pugilism.

This kind of fuss was not new to Byron. He had already witnessed a similar scene in 1813 when, at Lady Heathcote’s ball, Lady Caroline Lamb broke a glass and tried to cut her wrists, after he had publicly insulted her. In the same letter he added that “I had seen fits before, and also some small scenery of the same genus in and out of our island; but this was not all”. The theatrical scene went on when

After about an hour, in comes—who? why, Signor S * *, her lord and husband, and finds me with his wife fainting upon a sofa, and all the apparatus of confusion, dishevelled hair, hats, handkerchiefs, salts, smelling bottles—and the lady as pale as ashes, without sense or motion. His first question was, ‘What is all this?’ The lady could not reply—so I did. I told him the explanation was the easiest thing in the world; but, in the mean time, it would be as well to recover his wife—at least, her senses. This came about in due time of suspiration and respiration.

However, everything was soon settled, as Byron told Hobhouse in the same letter:

You need not be alarmed—jealousy is not the order of the day in Venice, and daggers are out of fashion, while duels, on love matters, are unknown—at least, with the husbands. But, for all this, it was an awkward affair; and though he must have known that I made love to Marianna, yet I believe he was not, till that evening, aware of the extent to which it had gone. It is very well known that almost all the married women have a lover; but it is usual to keep up the forms, as in other nations.

Here Byron seems to recall once again the custom of having a cavalier servente, as the whole episode didn’t seem to bother Marianna’s husband, who remained quite calm. The next day everything seemed to be settled (“how they settled it I know not, but settle it they did”), even though the whole affair was soon known by the whole city of Venice:

(…) the sister-in-law, very much discomposed with being treated in such wise, has (not having her own shame before her eyes) told the affair to half Venice, and the servants (who were summoned by the fight and the fainting) to the other half. But, here, nobody minds such trifles, except to be amused by them. 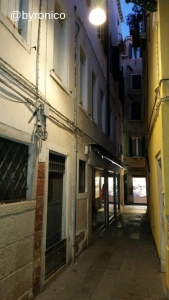